It’s been two weeks since the last Dev Blog, the longest period since we announced the sequel.

Fact is, there hasn’t been too much to talk about. Clive and I have been working on some Diplomatic interface mock-ups, but they’re not ready to share with you yet. Contracts are still being tinkered with, and potential new team members are being sounded out, but these things always seem to take much longer than one feels they ought to. People get sick. They need to cover childcare unexpectedly. Meetings get postponed because urgent client work pops up. Business as usual.

Business As Usual (BAU) is also the name of a key part of the Fate of the World game engine: it’s the very important code which models basic human economic activity, in response to the resource shortages, technical advances, and ecological setbacks that occur in the decades ahead.

The principles are as follows:

* A region’s economy is divided into Agricultural, Industrial, and Commercial sectors.

* Each sector consists of labour (individual workers) and infrastructure. Infrastructure consists of the buildings, machines, tools, and installations which allow workers to be more productive.

* Infrastructure is measured as “Capital Index”, where one unit of CI is the equivalent of a single workers’ productivity. So, if each farm worker has a tractor which allows them to do the jobs of 10 additional workers, the Capital Index would be 10.

* Both workers and Capital Index have resource requirements – how much water, oil, gas and coal they need to use. They also have energy requirements too – raw electricity, which can be generated in many ways. Finally, transport requirements are factored in.

* Once all this data is established, then each turn the BAU code will attempt to fulfil each economic sector’s resource requirements. If these are completely filled, then the sector will output 100% of its possible GDP, and a small amount of Capital Index growth will occur. However, if there are resource shortages, then GDP output will be hampered, and Capital Index is likely to shrink.

Of course, there are all sorts of other misfortunes which can befall Capital Index. Floods, fires, famines, political upheaval, even nuclear war… there’s a lot of bad stuff that can happen in the future.

If you own FOTW, and want to have a poke around the system, you can delve into the data using the “Stat Telemetry” button shown on the screenshot below. This brings up an interactive data set which shows the flows of resources through the BAU engine – just click on a particular lozenge to see more details about it. 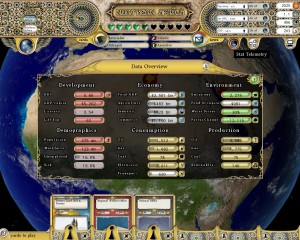 What sorts of improvements to BAU are we discussing for FOTWO? Right now, it’s looking like a complete overhaul, though the core principles will be preserved.

First, we’ll be modelling data at a national level, which means we can be more accurate and nuanced in how we measure things.

New resource types will be included. Aluminium and iron production will both be added, rare earths and phosphorus too.

Land usage will feature for the first time, allowing us to measure capital density, and closely model the impact of environmental decay.

Finally, we’ll be expanding the economic sectors into different subtypes: Arable, Pastoral and Mariculture for Agriculture; Resource extraction, refinement, and manufacture for Industry; and Retail, Services, and Finance for Commercial.

Creating these systems changed forever our understanding of how the world works. We hope they inspire you in the same way.