First, here’s the most recent piece from concept artist Joe Knight, and subject of our most recent Newsletter competition. 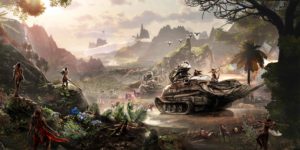 We wanted an image showing the despoliation of the Amazon rainforest by tree-felling robots, and the reaction of the people whose homelands are being destroyed.

It has all the haunting beauty we’ve come to expect from Joe’s work, and we think it’s a fitting endpiece to his current sequence.

Many thanks to everyone who sent in entries. After much deliberation, we’ve picked  five winners, so well done Lucas, Travis, Charilaos, Mart, and Andrew: we’ve sent you all a Steam key via e-mail. Our commiserations to the losers,

Meanwhile, Unreal development is going well, as we transform our plans from pre-production into working reality. With many issues already discussed at length and well-understood, we’ve been quick to implement them into the game.

Of course, there are still occasions where our assumptions have been proved wrong – some elements have turned out to be under- or over-sized, for example, and there have been several occasions where we’ve implemented an element only to immediately think of how it can be improved.

Fortunately, the team is experienced at agile development, allowing our work to be rapidly iterated and improved upon. Progress is reviewed at least once a day, and we’ve been able to identify and resolve problems the moment they arise.

Nevertheless, there have still been teething problems on the way. We crashed Unreal earlier in the week while importing a transparency-heavy art asset, and lost several hours of work, but fortunately the damage was minimal and easily repaired.

Overall, though, progress has been very promising and the mood within the team is highly optimistic. We seem to be well on schedule to achieve our goals in time for a September Kickstarter launch; it’s likely we’ll be able to share some in-game screenshots with you before then too.

As always, thanks for reading, and we’ll be back next week with another update.