We’re finally ready to give you a look at what we’ve been working on for the last few months.

To be very clear – what we’ve got so far is very much our first ‘working solution’. All the artwork has been generated internally – not by an artist – and is one of the first things we hope to attend to once our Kickstarter has succeeded.

This is the worst it’s ever going to look, and pretty much everything is subject to change…

But with that said, here is the first glimpse of the Main Screen ever released:

This is the Economy Panel; one of six panels on the Main Screen, each with it’s own unique display and each covering a specific area of the game model.

For those of you who have played FOTW, you’ll notice the panel covers off some several very familiar key stats. Here’s what the Economy UI looked like in the old game.

We’ve retained the three key economic sectors of Agriculture, Industry, and Services – the latter has been renamed from Commerce, to reflect its broader reach (for example, transport is now included here, rather than as an external resource).

One thing to bear in mind with this element and the ones like it, is that they represent the most concise summary of the game system beneath them. Each of those economic sectors has multiple sub-divisions: for example, Agriculture is broken down further into subsections like Arable, Pastoral and Livestock, and Mariculture and Fishing.

If a player wants to know more info, then these panels also act as buttons: clicking or tapping on a panel will open up its specific sub-screen, so you can examine the subject in depth.

Overall, though, our intent is that you only have to dive deep down into the model if you really want to. We’ve really tried to make it so that all the most important information you need is there, ready to hand.

A good example of this is the Emissions part of the panel. Beforehand, the breakdown emissions was on a completely separate screen from the Economy, as you can see here: 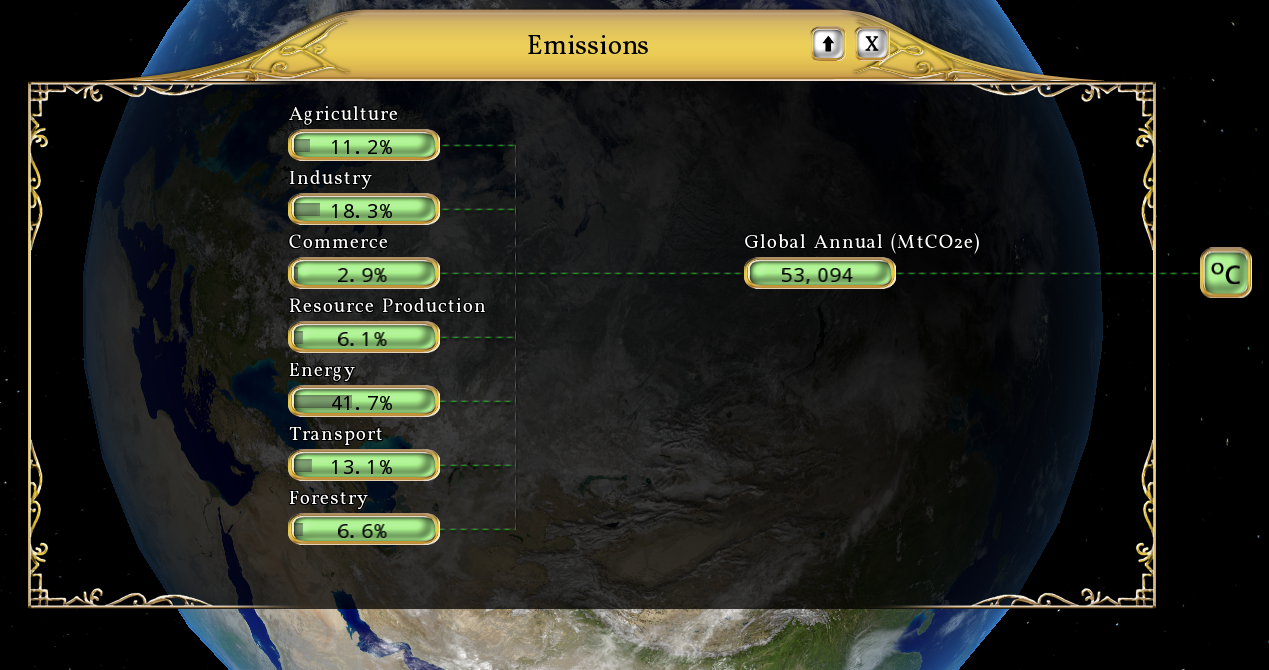 To make a sensible choice, you’d need to flip back and forth between the two screens, and then go find the card you wanted to play. Now it’s all one one at-a-glance panel, meaning you can spend less time searching around for information, and more time figuring out a solution.

One final thing: you may have noticed a new stat called “Wealth”. For the first time, we’ll be modelling in-game the accumulation of wealth throughout the world, and how inequalities in ownership can exacerbate the problems of climate change.

This is just one of the new features we’re adding to the game, which will make it not only more fun, and easier to play, but also deeper and broader in the issues it ponders. It’s all very exciting, to be honest.

We’re going to be sharing more and more screenshots of the new version as we get closer to the Kickstarter launch, with mailing list subscribers always getting the first view… so please sign up if you want to be keep up-to-date with what’s going on.

Thanks for reading, and we’ll be back with more updates very soon.

PS. If you are on Facebook, join us for regular dev discussions in the “FOTW Online Facebook Group”